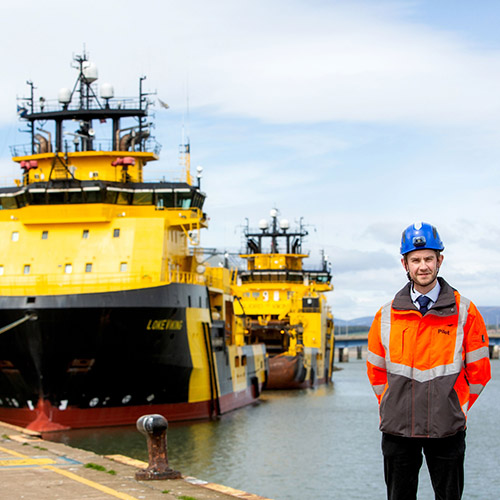 Angus joined the Montrose Port team at the end of November, having previously worked for Maersk Supply Services since 2010. During this time he would be out at sea for 5- 6 weeks at a time on a vessel providing towing, anchoring and supply chain to offshore platforms.

The ships he worked on would often visit Montrose Port, and it was this which first inspired him to think about the possibility of an onshore role in this part of the world. When he saw his current pilot role advertised in the Summer he jumped at the chance to apply.

Based in London during his time with Maersk, Angus and his wife moved to Montrose at the end of last year and are very much enjoying the change in lifestyle. They have been making the most of getting out for long walks in the countryside with their dog, as well as welcoming their first son in February.

How did you get into the maritime industry?

After leaving school at 18 I started a cadetship with the Merchant Navy, which involved a combination of attending Strathclyde University for three and a half years, while rotating with the ships team. I really enjoyed this training and experience and got the job with Maersk shortly after graduating.

What’s a typical day like for you at Montrose Port Authority?

Mornings are spent in Port Control working out which movements will take place that day and speaking to agents requesting piloting and berthing. Depending on the number of ships we have coming in we can see anything from 2 to 8 movements per day, depending on the time of year. Due to the fact that Montrose is a tidal harbour we have to carry out movements within quite tight timescales before the tides go out, so we’re always kept busy with a new challenge.

We see great variety in terms of the vessels coming in, for example recently there has been an increase in cargo coming through the port, at other times we have more energy related vessels.

Afternoons are typically spent piloting ships into the harbour safely and then leading them back out. When a ship is coming into Port we will go out on the pilot boat for up to 2 miles, before getting onboard and helping to guide ships in. Montrose is a very tidal port and for this reason it’s essential to have local knowledge in order to guide vessels in safely.

No day is the same though, and this is what makes the job so interesting.

Have you seen any changes in work practices during the lockdown?

Luckily Montrose Port moved from the traditional whiteboard system to an online system called ION Marlin SmartPortTM at the start of the year. With the Marlin SmartPort system I can now log on to my laptop at home and see the movements for the day and have all the port control details at my fingertips. This has been invaluable during this time and means we can crosscheck information from the comfort of our homes, although obviously we still go out to pilot in the ships. It means that we’ve been able to work as safely as possible during this uncertain time.

The transition from the traditional whiteboard system was extremely smooth as the Marlin SmartPort software is based on this and looks very similar. We also had members of the ION team come up to Montrose for a week and give us comprehensive training in all aspects of the system, so we're all very comfortable with it.

It’s definitely given us an advantage as a Port and it’s great that we are one of the first port’s in Scotland to use this.

What’s your favourite part of the role?

The fun part for me is moving the ships on a daily basis.This is what I enjoy the most about the role and the difference between my last role. No two maneuvers are the same and the water presents different challenges each time. In this job you constantly need your brain in gear and your hands at the ready; it’s great to be able to come into work knowing that you'll be doing that.

I also like how I get to meet new people and so many different nationalities. It’s a very multicultural environment due to the variety of vessels we have coming ashore. Some days you could be hearing stories from a Russian captain, and then then the next day a Dutch captain. Everybody has a story to tell and we get to meet some interesting characters while piloting the ships into Port.

How have you enjoyed your time at Montrose so far?

The great thing about the Port is that everybody knows each other and takes the time to stop and speak. It’s a very close knit team and everybody has gone above and beyond to make me feel welcome. During my first few months in the role my wife and I had a son, and the support I’ve had from all the team at this time has been superb. It’s a really great atmosphere and I’m pleased I made the move to Montrose.

I also really like how the Port is at the heart of the community as we’ve seen with the Clap for Carers horns on a Thursday and with our upcoming VE Day celebrations. You can see there’s great community spirit and I like being part of that.