WORLD WAR ONE VETERAN WAS BUILT TO LAST 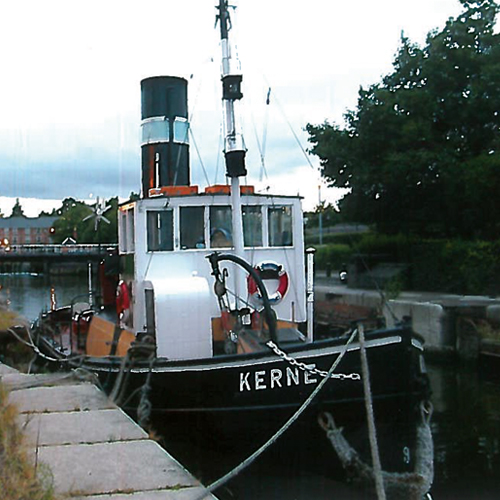 Due to undergo partial re-tubing of her boiler in Liverpool docklands is the Montrose-built steam tug Kerne. Launched from the Waterside yard of The Montrose Shipbuilding Co. Ltd. in late December, 1912 as the Viking, she was taken up by the Admiralty the following year and based at Chatham Dockyard. With many warships coming back to home waters around that period there was plenty work for her and her sister tugs.

Little did the craftsmen who built her in the premises at the foot of Ferry Road think that she would still be around and sailing under her own steam driving her original engine over one hundred years later.

Renamed Terrier, she continued to work in the Royal Navy dockyard and River Medway in the inter-war years and later throughout World War Two before being sold off in 1948 when she was transferred to Rochester tug operators J&P Knight Ltd. who changed her name to Kerne to meet their company fleet nomenclature with names beginning with the letter “K”.

She was sold on a short while later in 1949 to the Straits Steamship Company Limited and saw service around the Mersey, Manchester Ship Canal and Weaver Navigation working for 22 years for the parent company Liverpool Lighterage Company as a lighterage tug before being laid up in 1971 and offered for sale to a shipbreaker. Six years later her present owners, North Western Steamship Company Ltd. was set up from among the group of steam enthusiasts who bid the initial £25 more than a scrap dealer and her future was assured. She is currently operated by The Steam Tug Kerne Preservation Society Ltd.

Interestingly a line of dressed stones can be seen protruding from the sand downriver from Montrose port near the Upper Lighthouse at certain states of the tide and is possibly the last sign of the base of the shipyard slipway where the Kerne was cradled. A former wall of the shipyard plating shed is also said to form part of an adjoining fertiliser blending and storage plant.

Completed shortly after the Viking in 1914 was a similar vessel the Kentavros, which was built to the order of Greek owners Embiricos Brothers of Piraeus. She too saw war service but of a different kind. She was sunk during the run-up to the German occupation in World War Two. Realising they needed tug power she was raised and used for towing flat-top barges loaded with Panzer tanks for further military advances to other Greek islands. She was eventually thought to have been broken up in the 1970s.

The Steam Tug Kerne Preservation Society Limited was presented with The Queen’s Golden Jubilee Award, the equivalent of an MBE, for voluntary service by groups in the community in restoring and preserving the Kerne. She is the last remaining coal-fired ship to have served the Royal Navy in two world wars. She is also part of the Historic Fleet as designated by National Historic Ships. A small display describing the Kerne is planned for Montrose Museum in 2019.