The Board
Our team of non-executive directors

Montrose Port Authority has operated as a Trust Port for nearly 200 years. During that time the Trust Board has used its wide range of knowledge and experience to steer the management and development of Montrose Port into the 21st century port we see today.

The Board brings a wide range of management and specialist expertise to Montrose Port, and all trustees share the fundamental aim to maintain, improve and develop the Port. 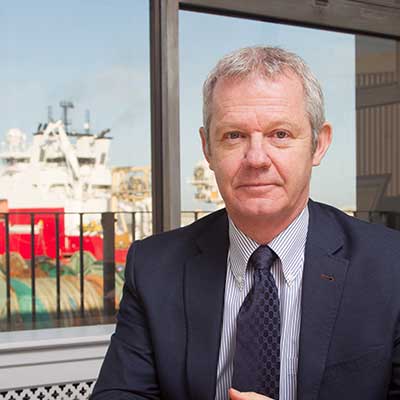 This is a hugely exciting time for Montrose Port Authority as we look to the future and how best to maintain and grow our existing energy support business, while at the same time making the most of the upcoming opportunities in the Renewables and Decommissioning markets.

Innovation continues to be key to future growth and our long-term diversification strategy will provide significant opportunities not just for the Port and its stakeholders, but for the wider supply chain across Angus.

Day to day the Port’s strengths lie in its consistently flexible approach and dedicated team, both of which have played a huge part in recent successes and will undoubtedly continue to do so.

Peter Stuart – Chairman
Our Board Members

A Board member since 2015, Peter was educated at Montrose Academy before completing an engineering degree at Heriot-Watt University in Edinburgh. From there he started his career with Halliburton and pursued an engineering career within the oil and gas sector which has spanned some 40 years, working in roles within Sparrows Offshore, Drexel, Tuboscope and National Oilwell Varco (NOV). In his latter years with Tuboscope and NOV, he was responsible for running the company’s Eastern Hemisphere operations.

For the past 13 years, Peter has worked in an advisory and executive management capacity with Oil and Gas private equity firm SCF Partners, including five spells as acting CEO of portfolio businesses. He is currently a non-executive director of global Valve Management and Turbine repair company, Score Group Ltd, headquartered in Peterhead, but with businesses in the USA, Canada, Europe, the Middle East, South East Asia and Australia. Peter lives in Montrose and is also active in the local community including his role as Vice Chairman of Montrose Football Club.

Hamish joined the board of Montrose Port Authority in 2016. He has lived and worked in Tayside for most of his life and is familiar with the commercial and industrial activity throughout the east coast of Scotland.

A law graduate from the University of Dundee, he completed his training in Dundee before being invited to join a legal firm in Montrose as a solicitor.

He started his own firm in 1979 and has worked as lawyer ever since, specialising in civil/criminal court cases, employment, corporate and damages actions. He is a past tutor/course leader in advocacy and pleading on the postgraduate course (Diploma in Legal Practice) at Dundee University. Now partially retired, he retains a number of business interests.

New to the Board in 2020, Tom has lived in Montrose since 1978, attending Montrose Academy before commencing a 36 year career in the oil and gas industry, working around the world initially in the service sector before spending 23 years working for operating companies Total, BG Group and finally Shell. He now works as part-time independent consultant to the international energy sector.

Tom's final role with BG Group was Global Well Intervention Manager and prior to retiring from Shell in summer 2020 he was Well Engineering Manager (CWI) for Shell UK. Tom's extensive experience with oil and gas development projects as well as decommissioning (wells and facilities) projects in recent years are well aligned with his aspiration to support Montrose Port in playing an active part in the UK energy transition.

Paul is a Chartered Engineer and Fellow of the Institution of Marine Engineering, Science and Technology, he is also a mentor and assessor for engineers wishing to develop their careers to Chartership. With a career spanning over 30years in the offshore energy sector, Paul’s experience has been built through a variety of roles in Europe and West Africa on global scale projects.

Now operating as an independent consultant to the energy sector, he has been working alongside the Port Authority supporting their diversification in to the offshore wind market including the Seagreen O&M. Paul is also active in new offshore wind licencing for projects which will be developed in the latter half of the decade.

Paul’s ambition for Montrose Port is to assist it through the energy transition from a significant hydrocarbon base to a renewable energy port. With the port established as Europe’s principal base for mooring chain deployment, it is well placed to take advantage of the coming Scottish floating wind market.

Kim is an experienced people leader who has worked across multiple industries in her career, spending the last 6 years working in the energy industry at executive level for a global leader in energy and technical services based in Aberdeen.

Harry Knox has been involved in the offshore shipping industry for over 20 years. Initially sailing as an Engineer onboard Diving Support and Pipelaying vessels, he moved into vessel management ashore with a leading Offshore Owner in 2007. Over the next 12 years he worked through various roles culminating in leading their offshore business in the UK and having the responsibility globally as their Head of Chartering.

In 2019, he commenced his current role as Managing Director with V.Ships Offshore in Aberdeen and has the responsibility for their global offshore ship management operations, covering offices in Brazil, Monaco, Singapore and the UK.

He holds an MBA in Ship Management from Middlesex University, and also sits on the board of the Merchant Navy Training Board.. He is also a former Chairman of the Aberdeen Maritime Branch.

Fiona is a master mariner having sailed deep sea with a number of different shipping lines and on a variety of different vessel types, most recently BP Shipping's tankers.

Having come ashore in 2013 to raise her family, she currently works for BP Exploration in Aberdeen as a Marine Operations Advisor and joined our board in 2016.

With over twenty years’ experience in the energy sector Dorothy has a proven track record in Offshore Wind development and delivery. Dorothy joined the board of Montrose Port Authority in 2019.

A Chartered Accountant and graduate from Dundee and Strathclyde Universities, she is an independent consultant providing support to the Supply Chain and developers in the offshore wind sector.

Having previously worked as a senior manager in Offshore Wind in both the private sector and the public sector, including The Crown Estate, Dorothy brings a wealth of knowledge and experience in renewable energy to the Board.