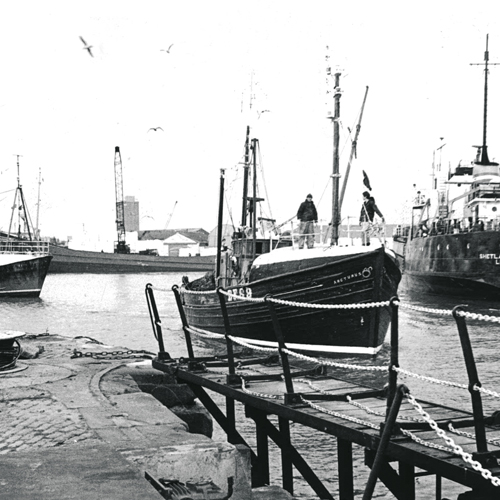 The Wet Dock at Montrose port was constructed under an Act of Parliament entitled “An Act for improving the harbour of the Burgh of Montrose in the County of Forfar”, dated July 3rd, 1837. Six years and 12 days later on July 15th, 1843 the dock was completed.

There certainly was a pressing requirement for a Wet Dock. The 1830s were a decade of growth as the income collected from Customs Dues and tonnage figures from the local shipping register confirmed.

A civil engineer based in Dundee, James Leslie was appointed to undertake the project and in February 1838, he brought forward proposals and accompanying plans for such a development at an estimated cost of £35,121.12s.8d. However, it apparently ran over this figure by approximately £550.

Some Harbour Trustees were satisfied with the plans, but others felt they required a more ambitious scheme. James Walker, an engineer from London, approved of Leslie’s plan but felt the wet dock should be a tidal basin and a wet dock then excavated behind it, i.e. on the east side of the present-day Ferry Road. A compromise was agreed and a short temporary stretch was built into the dock wall it should expansion be required later.

The actual contract for the building of the Wet Dock was signed on May 22nd, 1839 and construction began five months later. The foundation stone was duly laid with full Masonic honours amid great celebration in the town.

The first recorded ship to enter the Wet Dock was the clipper schooner “Eagle” owned by the Montrose & London Shipping Company on Saturday evening September 3rd, 1843 “making her entry in a most graceful manner amid the cheers of thousands who had gathered to witness the interesting ceremony”. Nevertheless, there was no official “junketing” due to financial stringency pertaining by that time.

The Wet Dock, without any marked ceremony, was filled in over a period of a month commencing early July 1981, its continued use having become uneconomic due to faster turn-round times required by modern shipping and the urgent requirement for storage space within the immediate port area.

For the record, the last ship to leave the dock was the West German-owned, Bremen-registered, 1,174-ton deadweight Ronnebeck built at the C. Luhring shipyard in Brake in 1964, which discharged a cargo of bulk animal feedstuffs.