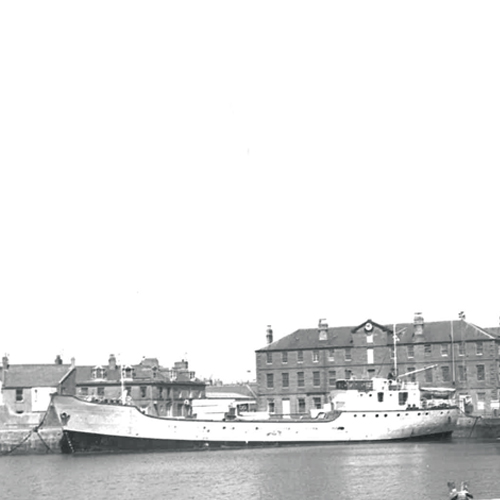 This month, MPA archivist, John Aitken examines trends in vessel size and cargo being handled through the Port.

Gross tonnage throughput at Montrose port has recorded a steady increase in recent years. In 2013 the annual figure was given as 1.7mn. Two years later it had grown to 2.08mn. The latest total for the past 12 months to the end of March, 2019 has broken through the 3mn. ton mark.

Although the number of both commercial and oil-related arrivals has not reached the levels of the early to mid-1980s, the increasing size and tonnage of ships has more than compensated for the shortfall.

With the first supply ship at Montrose port recorded at 43 metres in length in 1971, this can be compared with the arrival of a recent Norwegian-flag anchor handling tug/supply ship in excess of 107 metres, then an accurate assessment can be made. A snapshot taken in April, 1961 takes a brief look at the size of vessel and cargo being handled and how trends have expanded dramatically out of all proportion at the port.

How things have changed at the harbour. A local newspaper headline at that time reported on “New Trade at the Harbour”. It described the first bulk grain cargo being sucked out of the hold of the Newcastle-registered coaster “Derwentwater”. Transhipped at Rotterdam, it was hoped that the 275-ton shipment would herald the beginning of a substantial new trade at the port.

The cargo, consigned to Messrs. John McKenzie & Sons Ltd., flour millers, was thought to have been the first bulk shipment by sea destined for Montrose for over half a century. It was all Manitoba No.4 grade wheat shipped from Canada to Rotterdam in a bulk carrier to be distributed from there to a number of consignees. It was to be used for bread flour, the demand which kept Messrs. McKenzie working day and night.

In order to discharge the cargo promptly the firm had purchased a suction plant with a capacity of 25 tons per hour. After some “teething problems”, the machine settled down to its allotted task and the ship sailed on schedule. The grain was transferred from the coaster into railway wagons which were then shunted to the mill’s own private sidings via the harbour rail network.

It was hoped that should this innovative system of discharge be successful, larger ships could then become involved in the trade. The Harbour Trust offered the use of shed capacity for additional storage capacity should the mill become short of space. Messrs. McKenzie at one time owned their own ships, including the “Maria Cheesman” and the “Design”.