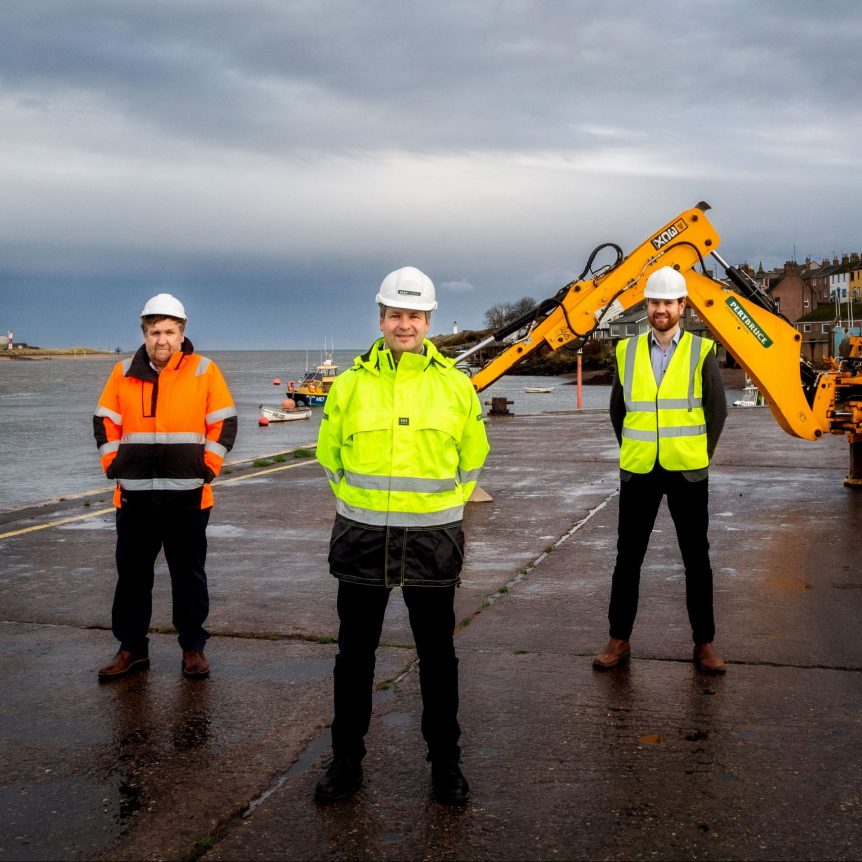 A Montrose construction firm with its roots in the local area going back five generations has been appointed by SSE Renewables to carry out the works on the Seagreen wind farm operations and maintenance base to be located at Montrose Port.

Pert-Bruce Construction were awarded the prestigious contract in October and will start on site this week. Located at the Port’s South Quay, the base will include an operations building, repurposed warehouse, communications tower, and a pontoon for crew transfer vessels travelling to the Seagreen wind farm site 27km off the Angus coast.

Work on the operations building and repurposed warehouse is scheduled to take around a year and will all be carried out by Pert-Bruce and several local subcontractors. The operations building was previously used by an oil industry supply chain company in Aberdeen and will be regenerated as part of efforts to contribute to the circular economy.

Managing Director, Craig Bruce said, “We are delighted to be involved in such an exciting development which will have huge benefits safeguarding 25 -30 jobs over the year within our business and our wider supply chain. Being awarded a contract to be part of the largest offshore wind farm in Scotland by SSE Renewables is testament to our diverse capabilities, loyal workforce, and reputation for excellence.

“The Operations and Maintenance base will play a significant role in the day-to-day running of Seagreen and we look forward to getting started on site and taking this important part of the project to completion. “

Andy Kay from SSE Renewables will oversee the delivery of the work at Montrose Port for his company. He said:

“SSE Renewables has consistently gone beyond the rest of the renewables industry in seeking to create a supply chain that maximises the wider economic benefits for Scotland.

“We aim to utilise Scottish, UK and of course locally based suppliers where possible during development, so we are very pleased to welcome Pert-Bruce on board.

“My team and I look forward to working with them and their local subtractors over the coming months.”

Chief Executive of Montrose Port Authority, Captain Tom Hutchison said: “The appointment of local construction company Pert-Bruce to carry out the works here at the Port on the Operations & Maintenance base is great news and demonstrates the huge impact the Seagreen project will have for Angus and its wider economy.

“Pert-Bruce are well known for their highly skilled workforce and commitment to high quality workmanship and I’m delighted that such a renowned local company will be part of this important phase.

Seagreen selected Montrose Port as the home for the operations and maintenance base for the 114-turbine development in October 2019.

The 1,075MW Seagreen project is located 27km off the coast of Angus. A £3bn joint venture between SSE Renewables and Total, Seagreen will be Scotland’s single largest source of renewable energy, providing a significant contribution to Scotland’s net-zero ambition and enough clean, renewable energy to power 1.3 million homes. The wind farm will also support a £1.8M community benefit fund which will be divided between six Community Councils.