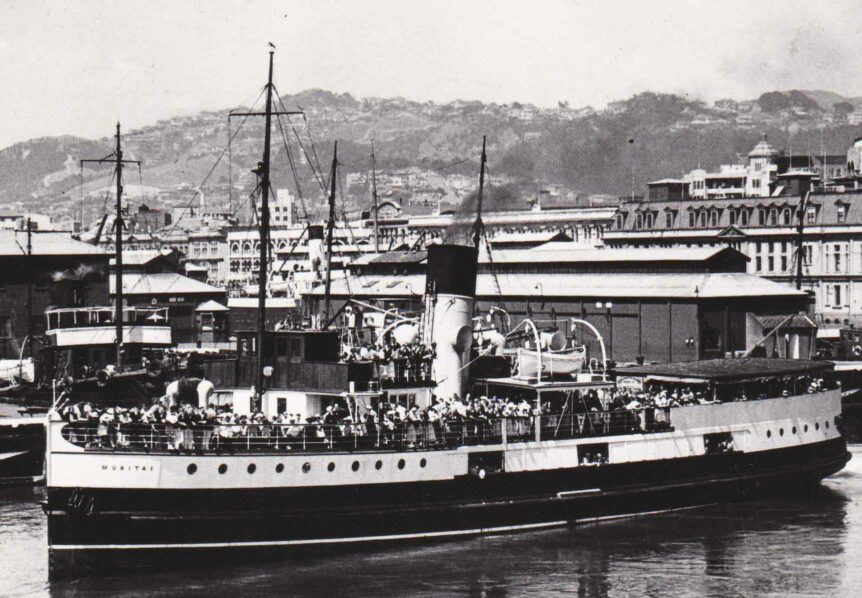 1922, the reputation of the Coaster Construction Company shipyard on Rossie Island, Montrose for high class workmanship was obviously travelling far and wide as they received an order for a twin-screw ferry for Eastbourne Council in North Island, New Zealand.

Their successful tender was one of several which had been vetted by a prominent naval architect of the time. On placing the order, it was stipulated that work should start forthwith and take a period of nine calendar month’s duration with delivery to Wellington Harbour, speed trials to take place in that port.

The new ship was designed with an overall length of 172 feet, 39 feet beam and engine power of 900 h.p. giving a speed of 13 knots with a carrying capacity of 1,500 passengers. Three decks were also specified.

The aim of the designers was to provide a ship with more than ordinary stability and with as much freedom from rolling as possible. The vessel was also to be fitted with special gangways to facilitate the rapid movement of large numbers of passengers during the busy season.

Distinguished visitors to the town of Montrose for the launching were Sir James Allen, ex-Premier of New Zealand and the then High Commissioner in London and Lady Allen, both of whom played leading parts in the naming ceremony of the Muritai. Local guests included Provost Foreman and Mrs Foreman and a number of dignitaries from the town and surrounding area.

Movement of the new ship down the ways was retarded for a considerable time mainly due to severe December frost gripping the grease. Despite this temporary hold-up in the planned proceedings, there was growing excitement building up among the growing number of spectators. With the addition of two wire ropes attached to her bows, the vessel began to move perceptibly after being assisted by a powerful electric winch plus several other devices. Once properly underway however, she glided in fine style and the cheers of the large crowd of spectators which had gathered to witness the spectacle.

On completion, the Muritai took her departure from the port for far-off New Zealand, but strong gales, heavy seas and tempestuous seas had delayed her trials for several days.

Under the command of the experienced Captain Fullerton and Mr. J. F Ryan, Eastbourne Council’s engineer who supervised construction of the vessel, the signal was given for her final departure. With the removal of the gangway the last link to the shore was gone. As she sailed down the South Esk there were cheers and the waving of handkerchiefs. She safely negotiated the bar and was soon enveloped by the mists of the North Sea

Her route took her past Gibraltar, through the Suez Canal, Colombo, Singapore, Surabaya, Torres Strait, inside the Great Barrier Reef then southwards to Sydney. Taking on bunkers, she then headed across the Tasman Sea to Wellington and Eastbourne.

A popular, if expensive-to-run vessel, she was taken up in 1940 by the Royal New Zealand Navy and initially used for patrol duties. She was then converted to a minesweeper, eventually sailing to Fiji to clear anchorages for the US Navy. Hidden under a cloak of grey paint she could only be recognised by her pennant number TO5.

In 1946 Muritai was purchased by the Devonport Steam Ferry Company intended for the Auckland–Matiatia service. She was sold on after five years for the Waiheke Passage service. Captain J. C. Smith, manager of the company confirmed at the time, “She is a grand vessel and her engines are in excellent shape. We hope to keep her for many years to come.” She traded for them for a further ten years.

Later put up for sale, she was purchased by Auckland interests and scrapped although there is a possibility she was eventually being used as an underwater reef in the coastal waters around Auckland.