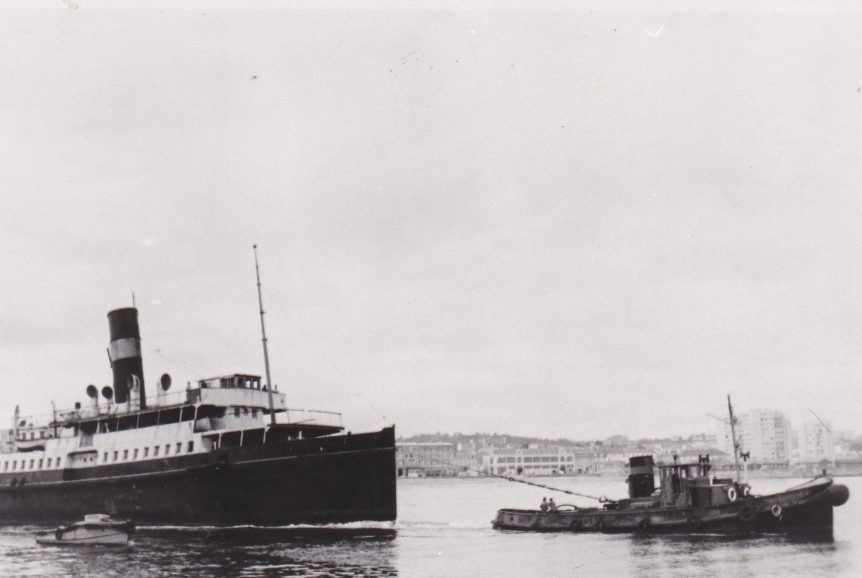 In the edition of April 6th, 1923 the “Montrose Review” reported on the launch of the TST Alsatia from the Rossie Island shipyard of the Coaster Construction Co. Ltd, an event which was witnessed by a large company of spectators.

She had  been named by Mrs Lyon, wife of the marine superintendent of the new ship’s owners the Cunard Steamship Company Limited of Liverpool for their associate company Cie. Nord Atlantique, to be based in Cherbourg. There was no hitch in the proceedings and the “vessel glided quickly down and took to the water in beautiful style.” She was later towed to Dundee to have her boilers fitted.

Alsatia was designed as a twin-screw tender for service at the French port to convey passengers to and from the company’s transatlantic liners Berengaria and Aquatania due to the lack of deep water berths alongside. On completion the Alsatia ran successful trials off Montrose and departed for Cherbourg watched by a large crowd who gave her a hearty send-off.

She was fitted out in luxurious style with mahogany panelling, upholstered in the latest style with long cushioned settees. There was first, second and third class accommodation, all well fitted out. The vessel had three decks, from all of which passengers could alight from the liners and was fitted throughout with electric light. Another feature was the baggage creeper by which passengers’ luggage could be transferred without difficulty to the hold.

The entire equipment and fitting-out of the vessel was in every way a great credit to Montrose shipbuilding. The spaciousness of the saloons and their handsome furnishings and decoration were in perfect harmony and could have been designed for much longer voyages. Both in design and workmanship she was a credit to her builders and a product that Montrose would have been proud of.

By the 1930s port facilities at Cherbourg had improved with the entry into the North Atlantic passenger services of the liners Normandie and Queen Mary etc. The Alsatia survived World War Two having previously been sold to a French salvage company Cherbouregoise de Remorquage et de Sauvetage and was involved in ferrying British and Allied troops across the English Channel.

In June, 1940, having earlier been renamed Ingenieur Cachin, she escaped to Falmouth. Taking the name Voluntaire, she passed to the British Ministry of War Transport and was managed by the LMS Railway Co. Returning to France in 1946 she became a floating service store from 1955. Later, in 1962 she was sold and beached at Querquevillle until 1968 when she was finally broken up.